Drivers & Bodyguards & Why I Don’t Trust Them

In the last issue (issue 55) I asked you whether you should trust your client? In this issue, I’m going a step further and adding bodyguards and drivers to the list!

Now, here me out. If you’re managing security projects it’s only a matter of time before you’ll have to deal and work with security personnel, bodyguards, and drivers that are not part of your team or company. Dealing with unknown personnel can be very problematic due to their potential lack of professionalism and egos.

I have plenty of stories ranging from drivers in London doing their best to lose the bodyguards, drivers going off route and driving into a favela in Caracas, Venezuela, because the client wanted something to eat and he told them he knew a good café, which just happened to be in the hood, through to a BG nearly shooting the client in the foot in Kurdistan with his AK as he got into their SUV.

If I do not know someone, I do not trust them, whatever their background or their CV claims that they have done. Trust is something that cannot be taught on training courses. People can be competent with firearms, good drivers, good communicators but that’s all garbage if they are not trustworthy. Will they try to steal your clients if they think they can take the contract? Will they sabotage the contact to steal the clients? Will they steal assets such as money or jewelry from the client? Will the use the clients cars for personal reasons? Will they use the client apartments or houses for parties etc. when they are unoccupied? Will they be getting drunk with the clients booze when they are on duty?

These things happen regularly and this why you must know who you are working with and especially who you are hiring. When managing a team or a contract one F#ck up can lose everyone their job, I personally saw the whole shift of three guys fired on an Arab contract in London due to one of the guys acting like an ass… The two other guys had nothing to do with the incident that got them fired.

Now, as I am sure most of you know the quality of bodyguards and trained security drivers can vary greatly and in most places the standards are low. I have seen many clients over the years being driven around protected by guys who just happen to have firearms permits or were moonlighting local police, who for all these clients knew were working for the criminals also. Several years ago, I went with two American clients to an island in the Caribbean where at the time the crime and kidnapping rates were high. My clients were dealing with a European company on the island that were to provide them with security, but they want me to go along as they were not getting a positive feeling from the trip and arrangements. So, I arrange extra trusted local armed security personnel and an armored vehicle to accompany us.

The population of the island is predominantly of African descent, so my clients and I had no real chance of blending in. My business partner met us with our local security guys inside of the airport, as there is always a high risk when leaving airports because you are being channeled. We then went to look for the security personnel who had come to pick up my clients from the European company they were dealing with. This company’s bodyguard was easy to spot as he was the only white guy outside of the airport holding a sign with mine and my client’s names on. At this stage the bodyguard did not know I was providing security for my clients. As we were going to his vehicle I informed him that I had my own local security personnel who would be following us back to our hotel. As we drove through the city my guys in a black SUV drove very aggressively and stayed close to our vehicle. When we got to our hotel the bodyguard told us to stay in the car as he thought we were being followed and was going to check the car out behind us; we were being followed, by my security people, he had not been listening when I informed him of this.

This bodyguard who I know must have done at least five years’ European military service and I expect at least one specialist training course made two very big mistakes that could have led to serious problems. One, he stood out at the airport and by having mine and my client’s full names on a piece of paper was letting everyone know who we were. If a criminal with an internet capable cell phone had Googled my client’s names they would have seen, they were worth kidnapping. Two, why did he wait until we got back to our hotel to check out my security guy’s car that was following us. If he thought they were a threat he should have asked us if we knew them, taken evasive action or stayed mobile and called for support; which this company claimed to have on standby. If my guys had been criminals, this bodyguard had just taken them to our place of residence. I still don’t know what he was going to achieve by going and checking my guys out at the hotel as he had no authority to stop and question anyone, he was also carrying a firearm which he could not really legally have a permit to carry.

This is a good example of supposedly trained security personnel not knowing or caring about what they are doing. I expect they had not had any problems or though no one would target them and had relaxed to a point of being ineffective, this happens if security teams are not well managed. The other funny thing was as we were leaving our hotel to go to my client’s first meeting with this company car they supplied got a flat tire and it had no break down kit. So, we transferred everyone to my local guy’s vehicle and left the driver to deal with the flat. We let the bodyguard sit in the front as we felt sorry for him; he was not having a good day!

If you are going to use local drivers and security personnel try to get them some training or at least go through your basic emergency plans with them. If you are under a threat, let them know that the threat also applies to them and their families. Make sure they take the relevant security measures and are always vigilant for the threat of criminal surveillance. Your driver should never stand outside the vehicle when you approach it, have a safety signal with them and do not approach the vehicle until they give the signal. The driver should always be behind the wheel with the engine running and ready to make a quick escape in the case of an emergency.

On arrival at your destination the driver should remain behind the wheel of the vehicle; it would be the job of the bodyguard to open your door, if required. You should always know where the driver is and how to contact them. If the driver is not 100% trusted only inform them of routes or destinations just before or after the journey has started and do not give them any long-term schedules.

And remember, Trust No One! 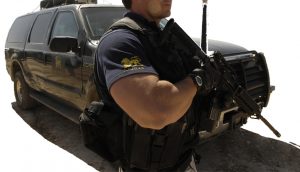 END_OF_DOCUMENT_TOKEN_TO_BE_REPLACED

Throughout my years of working in Venue Security, I’ve both learned and experienced quite a bit from …