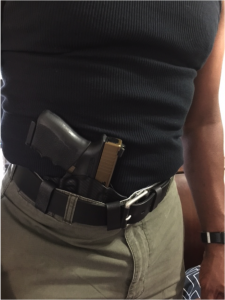 For those of us in protective services our goal is always risk mitigation verses risk management.

In fact in the history of the Secret Service you can probably count on one hand how many times they have had to engage in an armed encounter.  While a firearm is a tool seldom used, when it is required there is rarely a substitute.  However, despite the infrequency, last time I checked the Secret Service doesn’t leave their firearms home.  So like with the Secret Service, firearms still have a role even in the world of private security.  A tool we hope we never have to call upon but is there if needed.

As a protection specialist and firearm’s instructor I am always striving for ways to increase efficiency to allow me to enhance my protective skills for my clients, my team and myself.  When time is life and seconds matter we are always looking for ways to shorten the reactionary gap.  When dressed casually or with a closed front garment one of my favorite carry positions is Appendix carry.

For those who don’t know what Appendix Carry (AC) is, it is a method of carry that positions the handgun forward of the strong side hip, somewhere around twelve thirty (12:30) to two o’clock (2:00) on the body for a right handed shooter or eleven thirty (11:30) to ten o’clock (10:00) for a left hand shooter.  For those who grew up in the era of no hammer blocks, non drop-safe handguns, handguns without hammers, no manual safeties or those with poor finger discipline you are probably saying not only, “no thanks”, but “hell no”.  However before you rule it out, I encourage you to lower your muzzle and read a little further.

First let me say that I consider appendix carry to be an advanced carry position.  It is not that novices can’t learn to carry from this position but until they have developed consistent muzzle awareness and finger discipline I don’t recommended it for them.

I would prefer they stay with the traditional strong side carry method either inside or outside the waistband behind the strong side hip.  That means wearing your handgun somewhere between three o’clock (3:00) to five thirty (5:30) on the body for a right-handed shooter or between six thirty (6:30) to nine o’clock (9:00) for a left handed shooter.  Until you develop good sound firearm fundamentals you don’t need to work on advanced combative applications.

If you are concerned about the danger of a negligent discharge with appendix carry that danger exists regardless of carry position.  Carry position will never offset poor firearm handling skills.  Anytime you access your handgun you are often covering some part of the body.  The mere fact you are carrying a firearm you have concealed comes with risks.  Our goal however is to effectively minimize them and help tilt the playing field in our favour.  This position doesn’t, however, work for all body-types, particularly those who have large stomachs, as it orients the butt away from the body and by default pressing the muzzle inward.  This can create discomfort when sitting and inefficiency when presenting the weapon as you are forced to draw around your stomach.  Also since you are now placing an extra inch to inch and a half inside of your waistband, your pants must have the room to accommodate your firearm.

When working in crowded environments (political rallies, nightclubs, other large public gatherings etc., it helps avoid the bump frisk (intentional or accidental) or someone accidentally trying to disarm you from the rear outside of your forward view.

When it comes to engaging, boxers and martial artists have always known when their hands move from a shorter distance, combined with a straighter line, they are more efficient in striking their opponent.  And since your handgun is an extension of your hands and arms by positioning the butt of your handgun in front of your body verses behind you, you have effectively shortened the travel distance thus getting your muzzle on target and in your eye line faster.  Remember a gun fight is nothing but a fight that involves a gun.  All of the same fight dynamics come into play whether empty handed, edge weapons or with a firearm. For those with the correct degree of proficiency the Appendix Carry, is a versatile position that could give us the advantage we need to overcome the threat.

Speed of the presentation (draw-stroke) is enhanced based on proximity and shooter’s natural orientation toward the threat and starting point of the weapon. 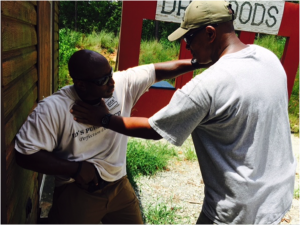 In the above photo had the defender been carrying his weapon in typical duty carry, kidney carry or small of the back carry position based on his position on the wall, it would have been virtually impossible for him to access his weapon and get the muzzle on the threat.

Appendix carry allows for easier access and presentation from almost any close contact fighting position.   Even in the event you find yourself on your back or side.

It is more accessible and comfortable when seated or driving.

A is for Appendix Carry
By: Mark “Six” James

END_OF_DOCUMENT_TOKEN_TO_BE_REPLACED

When it comes to a wardrobe fit for duty rule number one, you don’t buy it, you acquire it over …

END_OF_DOCUMENT_TOKEN_TO_BE_REPLACED

For many Close Protection Officers, finding work is harder than it has ever been. Not because there …